Dreda Dre
“The 5 Day Theory; My Mixtape is Better Than Yours”
GhostCoast Music
Mixed & Mastered By: Indecent the SlapMaster

By Aaris A. Schroeder

Dreda Dre AKA Black CAT, writing, producing in South Lake Tahoe has had the opportunity to work with over 50 artists at festivals and events such as “Rock The Bells 2011”and “Free Music Tour.”  Dreda Dre is also the founder of Ghost Coast Music which has grown from a small indie label to a more well-known US-based indie label.

The album, “The Five Day Theory; My Mixtape is Better Than Yours” brings fresh street beats with a chopped and screwed addition.   The impressive thing about Dreda Dre’s mixtape is that it was written and recorded in five days.  The album’s energy pulls anthem-style music, showing all what this young cat was going through in that particular week.

An example of this energy shows through on, “One’s Up” where he produces a house-jungle beat, chopped and screwed and talks about a lady roaming around the mountains where he lives, ending with his anthem for the album, “My Mixtape is Better Than Yours.”

For more information about Dreda Dre, check out the label’s website which also features other artists such as Century Got Bars, Joezy Wells, Flossalini, Ces One and more. 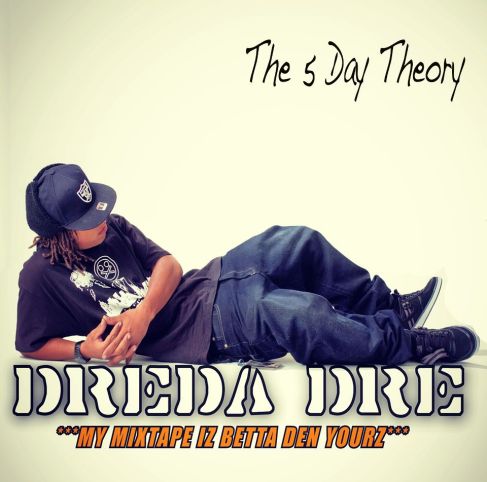