Hawaiiʻs Mauna Kea Under Threat from NASA & University of Hawaii,
Thanks to Governmental Support

Long ago, Mauna Kea, one of the largest mountains in the world located on the big island of Hawaii whose peaks hit 13,796 feet above sea level, was a hot magma-filled mantle covered in snow and ice. This covering is what the goddess Poli֡ahu among other gods is based on. As the mountain sun warms, she ʻmeltsʻ and descends to the bottom of the rocky cliffs below. She fights back and forth with her rival, Pele, the goddess of volcanoes. This celebrated and adored story has been passed down through ages of generations and is still talked about during storytime to the keiki (Hawaiian word for children) and kupuna (Hawaiian word for elders).

Currently, Mauna Kea, which means ʻWhite Mountainʻ in Hawaiian is the home of 13 international observatories from 11 different countries, including a 30-meter tall telescope all organized and led by the University of Hawaii system according to the Mauna Kea Visitor Information Station http://www.ifa.hawaii.edu/info/vis/culture-astronomy-and-natural-history.html. Thousands of visitors every year come to visit Mauna Kea space for natives to speak about the traditions and history of Mauna Kea. This peak was chosen as an observatory because it is so remote from other continents where there are lights and air pollution, among obvious reasons for its height.

The telescopes on Mauna Kea are some of the world’s biggest telescopes, helping mankind to learn more about the depths and mysteries of space and the thousands of galaxies within it. But there is a deep concern from the natives who are seeking respect for sacred native land, a place they go to pray.

Since ʻ09, Hawaiian protesters have made enough noise to catch the attention; whether it is support or awareness from politicians like Presidential candidate Senator Elizabeth Warren, Bernie Sanders and Hawaiian Representative and Presidential candidate Tulsi Gabbard. There has been national media coverage and support from celebrities like The Rock and Jason Momoa, both residents of Hawaii among others.

Hawaiians are now physically blocking construction of the new $1.4 billion telescope known as the ʻThirty Meter Telescope” on their sacred land against the wishes of the local government who is in opposition and on the side of the scientists and university. It is more than just native land to the indigenous peoples but a place of connection within the spirit realm and ancestors. Many of those in protest are Hawaiian kapuna backed by the younger generation who are students, parents and active members in their community in peaceful protests at the base of the mountain. There have been arrests made of the protestors within “obstruction of government operations,” even though the project is privately funded, by local authorities to put an end to the resistance. When a project is privately funded, the company funding the work does not need to be granted permission from the local people however the history of the mountain and its people is looming.

“If we say yes to more development, we are saying yes to the desecration of our temple and our ancestors, yes to the destruction of our waters and yes to the possible extinction of life itself,” says Kealoha Pisciotta, who is the president of Mauna Kea Anaina Hou according to SacredLand.

SacredLand also explains that Mauna Kea is the temple of the ʻSupreme Beingʻ and is recognized throughout Polynesia for over 1000 years as such and is where most of the clean drinking water comes from for the Big Island. Local Hawaiians are worried that natural resources will be sacrificed in the name of science.

This brings up an entirely different conversation: is the government-controlled by private interests and not by law and what the people of Hawaii want out of respect for indigenous peoples? Hawaiians continue to take their stand out of respect for their native land. The fight is similar to Standing Rockʻs Sioux people who fought to keep the Dakota Access pipeline from running through North Dakota; resulting in arrests and ultimately failed to keep government and corporations from coming in to dig. It is clear that even though the United States boasts to be a free country, the government clearly sides and uses its police force to condone corporate digs and projects. 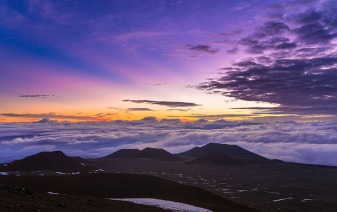 “What I keep hearing is, ʻitʻs just a telescope, itʻs not a pipelineʻ – no.” says former Kaniela Ing, former Hawaii State Representative according to The Intercept.

Indigenous Hawaiians are fighting for more than just the ability to have access to the mountain, it is in their right as natives to fight this modernized colonialism. Indigenous and local Hawaiians also know Mauna Kea as ʻMauna o Wakeaʻ which means, ʻMountain of the Hawaiian Diety Wäkea.ʻ The history runs deep within the soul of Hawaii and its people. Is the answer to compromise or for one side or the other to rule supreme?

The history of NASA and the UOH using Mauna Kea goes back decades but even before space exploratory scientists. There were businessmen which would be equivalent to corporations today who helped to overthrow the Hawaiian Island Kingdom and its Queen in 1893. Ultimately; between the exploitation of the land and its people, this time in history brought Hawaii to become America’s 50th state in ʻ59. This is around the same time that the federal government decided to give the property to the government and since the ʻ60s, the UOH has been leasing the summit from the government.

It was not until the ʻ70s that Hawaiians began to create awareness of its landʻs stolen culture. In ʻ98 destruction of historical sites including shrines, natural habitats, trash and leftover equipment from the research on the mountain was found to be draining on the spirit of the Hawaiian indigenous people. The construction on the mountain works against local species of plants, insects and birds, creating even more endangered species since the mountain has begun commercial enterprise in the ʻ60s. Even though the government proposed hundreds of jobs through space and telescope programs, the people saw exploitation and thus began their slow and steady protest for change to clean up and the ability to worship and pray at the mountain. It has been a long process, going back and forth since the early 2000ʻs with no clear answer yet as to what the future holds for the scientists and for the indigenous people.

To get involved, get educated and show your support, you can host a screening for, “Mauna Kea: Temple Under Siege,” a documentary created by Na Maka o ka ‘Āina in your own city or town. Thus far, there have been several viewings in the Hawaiian islands, Berkeley and Los Angeles, to name a few, according to Kahea.org. The film showcases the importance of Mauna Kea as a means for survival for the Hawaiian people on all levels

HOST A SCREENING AT A THEATRE, PROJECTION OR HOUSE PARTY FOR YOUR FRIENDS, FAMILY AND COMMUNITY BY CLICKING THIS LINK

To Reserve a Free Consultation to Get Started Hit This Link To Schedule!