As a two-time SAMMIE (that is the Sacramento Music Awards, for all of you out there) inductee (’07 and ’12)and recently adding another SAMMIE to his repertoire, Brian Rogers is well deserving and so is his band, Groovincible that performs all over Northern CA at events like Sierra High and Kaboo Festival in San Diego. Rogers has accepted the opportunity to have a song featured on MTV’s Laguna Beach and has even performed for comedian Chris Tucker. Recently, Rogers made a trip to Nicaragua to work within the community by recording 67 songs with Nicaraguan U.S.A. Musicians (N.U.S.A.M.) who combine the music of 25 local artists at no cost to help better education by donating school supplies to their village (www.arealpurpose.com).

Rogers’ history as a performer goes much deeper when he was just three years old. Rogers doesn’t quite remember playing “the little drummer boy” in a preschool play, as his mother reminds him but he does remember being in concert band during his 6th-grade year playing drums, bass, guitar and the clarinet, Rogers’ first instrument. In high school, Rogers found inspiration from jazz music.

“It taught me that music has no limits and how to recover from any mistake on stage—and invent something better.” Rogers reminisces.

Before joining any professional bands, Rogers already had a love for hip-hop. He says that hip-hop, “as an art form [is] presently the vehicle for my most personal confessions and revelations.”

Don’t get it twisted, Rogers’ favorite genre of music seems to be a mix of alternative rock and blues; think Dave Matthews Band. He really is inspired by the idea of mixing genres together to create a sound that people enjoyed. 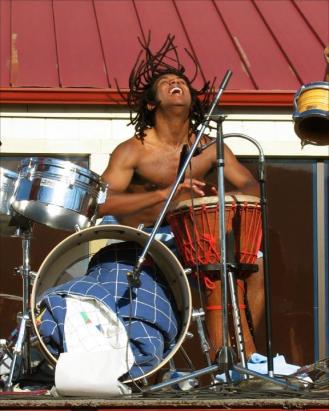 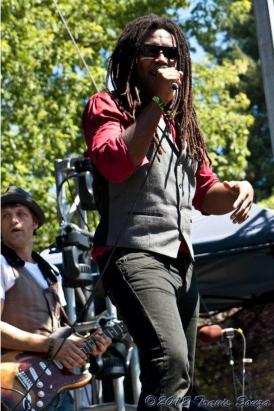 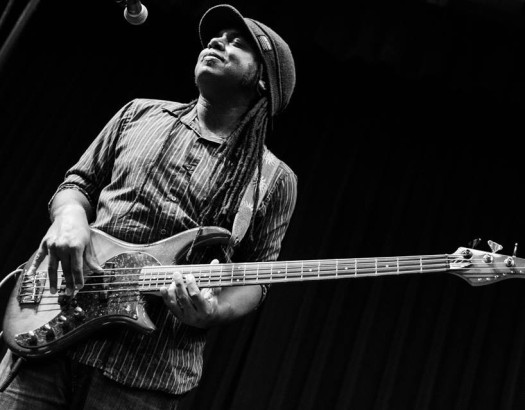 This act led him to join alternative rock bands. Although Rogers never thought of music as an occupational endeavor, it is music that he followed. Originally, Rogers wanted to be a pediatrician and could only appreciate life pursuits like architecture but then his mom pushed him into music and it actually worked. Since then, Rogers has been on a unique journey between finding his own style and discovering new genres and sub-genres of music.

“I consider my mom my first band member cause she forced me to play,” Rogers says lightly.

Roger’s modern sound that he shares with his many fans is “funk-rock songwriter looper,” he says, since he “writes funky songs that use the bass guitar and this reminds him of his Great Uncle [by marriage], Larry Graham, bass player for the infamous Sly and the Family Stone.

When playing solo, Rogers uses a loop pedal and acoustic guitar. He adds in percussion to layer over the bass.

“I guess that gives me a sort of Ed Sheeran-Keller Williams vibe,” says Rogers who learned bass from a blind man who was able to teach him by listening with his ears. Rogers applies what he learned from this man’s teaching techniques to how he learns new songs. Rogers tightened his performance skills even more by watching comedians like Chris Tucker, Lavell Crawford and Louis CK. Comedians teach him to loosen his communication style to fans and getting the crowd grooving.

“If you want to ‘get out there’ and play that song in front of people, listen to your stomach,” says Roger, “It’ll teach you how to perform—when to apply pressure and play harder, when to let up and play a ballad, when to tell a joke [and] how to handle a heckler. It’s primal and it’s hard to explain but your stomach will tell you when it’s okay to take a leap; when to take a risk.” 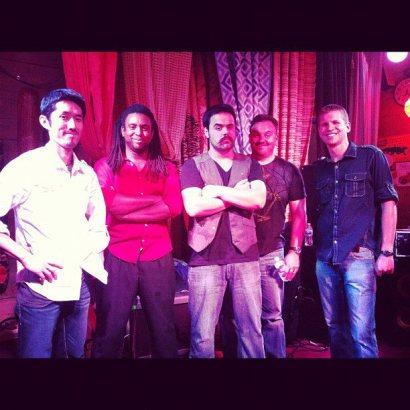 Rogers had never been to Nicaragua before the summer of ’15 but was lucky enough to be surrounded by positive people like local musician Jorge Real and local tour guide in Pénas Blancas, a small rural rain forest town. Rogers also worked with Ashley Busby, an uprooted Californian who, together with Real, work with local women to empower them through the arts and building a music scene. The two play gigs in town and help fix local’s instruments to empower their desire to perform. Back in SF, Busby founded Nicaragua USA Musicians (N.U.S.A.M.) with musical saint, Joe Baker. As if fate was sealed, Baker asked Rogers to come to Nicaragua to play with them by paying for his plane ticket and no promise to get paid for gigs. Once Rogers and Baker were in Nicaragua, Real helped to gather local musicians in the area of Pénas Blancas. Garrin Benfield, a New York guitarist and Jordan Feinstein, S.F. Keyboardist were also both a part of N.U.S.A.M.

“I had never been to, or played in or really thought extensively about Nicaragua, before going there and playing last year,” Rogers remembers.

N.U.S.A.M. has brought together 25 Nicaraguan artists, providing a variety of music ranging from traditional indigenous sounds, rock and roll musicians, emcees and folk singer-songwriters. Most of the musicians had never been on tour or set foot on a stage. They never had chances to set foot in a studio or had never made a dime in the music industry; they just purely were a part of this collective for the love. Rogers shares that N.U.S.A.M.’s idea to record a collaborative album and documentary film about each of these artists in Nicaragua will result in the community schools of Pénas Blancas benefiting their education.

“Education is very important. How important was it for us Americans to have colored pencils, regular pencils, markers, paper and erasers growing up? It made learning easier. That’s what we want, to help provide for the kids down there,” Rogers explains that the crew hand-delivered supplies directly to the schools and spent time with the children, coloring and talking with them.

“At first, I was kind of stand-offish while the other guys sat with the kids and joked with them and did art but Joe encouraged me to get in there. When I finally did, it was one of the best and most rewarding times of my life. The kids were smiling—they colored me multiple drawings and gave them to me. That was the real treasure; those drawings. That was the payment I got [from] the Nicaragua trip,” Rogers shares.

This is not the first time Baker and friends have had the chance to help out small communities. Soon there will be an album and documentary that follows a crew that went on a trip to Haiti and Jamaica in ’12. Nicaraguan footage and the official album is still in progress of completion. Cuba may be next on the map, Rogers tells. 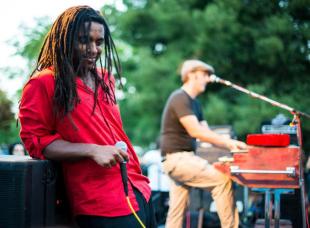 Upon returning and performing local shows, Rogers was caught up in the Bernie Sanders campaign. He does not remember how he picked up the gigs in which he opening up for the Sanders presidential campaign, however, the Sacramento infamous and longtime promoter, Jerry Perry initiated the booking details on May 9 at the Bonney Field sports stadium at Cal Expo. First, Rogers was asked to perform at the Sacramento State Capitol building with his drummer, Joseph when Sanders was making his Cali rally rounds before residents hit the ballots. Sacramento emcee and spoken word artist, Jason Chu was added to the roster to perform with Rogers in Vallejo.

“[Chu] made all the difference on that gig, [he] took the audience into the palm of his hand with slam poetry about how every American is an immigrant,” Rogers shared.

Because of their performance, the guys were asked to follow “The Bern” to the Vallejo Waterfront on May 18 and then off to Oakland. The events held at least 20,000 supporters in attendance. Rogers says that there were even over 3000 standing outside in Sacramento who could not even get in due to capacity issues. 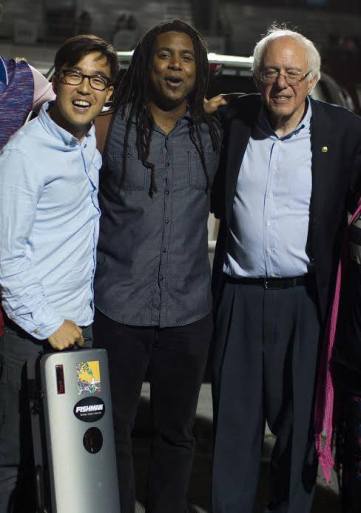 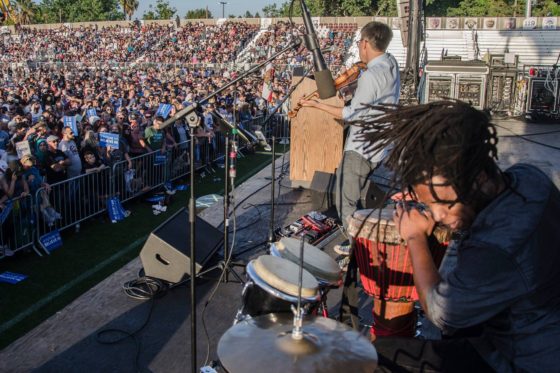 “First thing I noticed when shaking his hand is that he just had this really good energy, a very positive and innocent, almost gentle vibe. I immediately sensed good things when meeting Bernie Sanders.” Rogers says.

Rogers was already planning on voting for Sanders (before he dropped out) but was not active in the campaign or in politics in general. Attending and performing at these rallies made Rogers “hyped,” he says, adding that Sanders rallied for “everyday people.”

“I haven’t felt that in a while from a politician,” says Rogers who makes it a tradition to vote with his mom since he was old enough to vote.