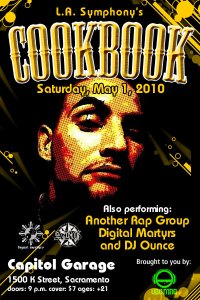 Maybe I am not the best person to write this but a review is a review and thus this is my opinion.  On May 1, UBO MAG invited Cookbook who is from the once-infamous indie hip-hop group, LA Symphony to rock the mic at Capitol Garage.  Knowing he would be performing to a smaller crowd of about 85 or so, it seemed fitting.  We set the date with the venue back in March and UBO added on Another Rap Group [A.R.G.], Digital Martyrs and, of course, DJ Ounce, UBO’s new house DJ.

The evening was set for success but began in the opposite direction, I arrived, myself exactly on time.  I was initially to arrive early to interview CookBook and help move chairs around but by the time I got there, the chairs were moved, Cookbook was running late and apparently so was A.R.G. and DJ Ounce.  I was only informed by Cookbook of being late and it wouldn’t affect his timing for the evening.  Digital Martyrs were already in the house, outside, that is of the house.  We delivered contracts and started the show 15 minutes late.  Not that too many people would have noticed once the show had commenced and these things do happen.

We had plenty of merch out that night.  Cookbook’s DJ; DJ Damage was holding down his merch table with cute, “Pretty in Pink” T’s for women and CDs for sale.  Shine Wear and SledgeHammer Graffix were also in the building selling apparell.

Digital Martyrs [Twitter @digitalmartyrs] added on an “extension” of their group, according to DJ SupaCMunky, SkyNet, made up of Task1ne, MadFlows and Mr Lingo [Twitter them @MadFlows, @Task1ne and @mrlingo].  Set started late and was a bit lengthy so we had to cut them short a song.  Apparently, Ospis [Twitter @ospis] of A.R.G. turned the mic volumes down and then off to move to the next set when I asked him and DJ Ounce to gently let them know we needed to move forward.  Digital Martyrs and SkyNet were pretty upset after their set, even though I was not aware or told of this.  Then the entire collective of people were seen sitting or standing outside smoking cigarettes and talking as A.R.G. came on the mic and rocked a very drunken set. I sent NorCal Chika [Twitter @NorCalChika] outside to gather everyone inside and instead of kindly reminding them of the set that was in action, she yelled at them to come in and then flipped them off as she returned inside to dance. Everyone inside was upset that most of the crowd was outside so Ospis took it upon himself to have the house curse Digital Martyrs outside causing even more strife and animosity.

At this point no one wanted to stay and there wasn’t too much that could be done because I didn’t even know half of what had happened.  CookBook took the stage about 12:40 and rocked it pretty hard to a crowd of about 10 people.  There were still some people outside but everyone was dwindling away.  I mean, when you look at the grand scheme of it, this is why people in Sacramento have a hard time getting out of their own city and the same reason people don’t want to come here to perform.  This was a poor show and an embarrassment.  I hope in the future that all of us can learn to communicate better to one another and also learn to support our brotheren in hip-hop the same way they show us support in the movement, otherwise what movement is there?